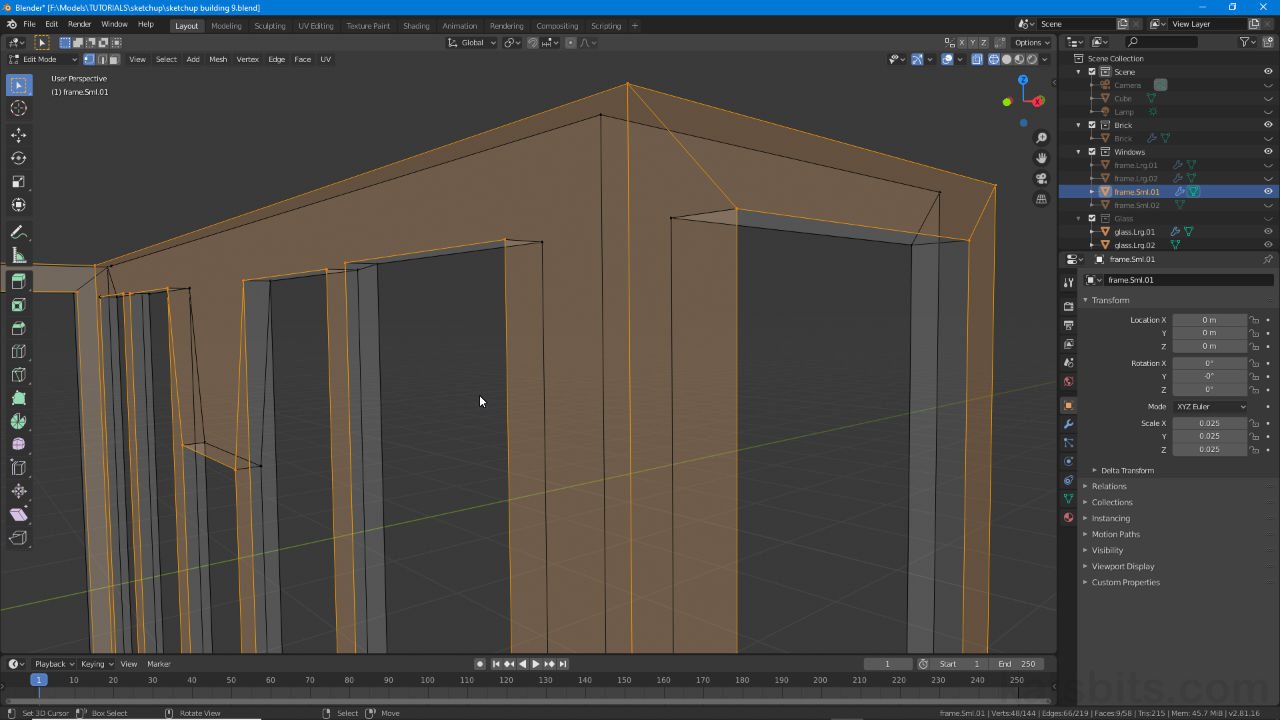 With newer versions of Blender a number of editing functions previously available in the Tool Shelf, now the Toolbar, have been reorganised or relocated so they make more sense contextually whilst working. One such tool is Remove Doubles (RemDub), now called Merge by Distance, that collapses, or merges, coincidental vertices together.

Important: depending on the version of Blender used, Merge by Distance may (still) be referred to as Remove Doubles.

The label Merge by Distance replaces Remove Doubles while the function remain unchanged. Here, use of the tool collapses and removes coincidental vertices. In other words vertices that are close to others, or occupy the same physical location or position (coordinates) are merged together and redundant or duplicate vertices removed. In this way a mesh is ‘cleaned’.

Design note: Merge by Distance is selection based so two or more elements (vertex/edge/face) need to be highlighted for the operation to function.

Shown above elements detached from one another due to their not having a common (shared) terminating vertex – this can change mesh behaviour and/or appearance, Mesh Smoothing for example – both green and red paths terminate separately, two coincidental vertices occupy the position causing a ‘break’ the structure. Merge by Distance changes this so both resolve to the same vertex.

To access Merge by Distance then, select an object (or objects) and switch to Edit Mode (Tab). Select the elements to be joined together, for example press A to select everything for processing (cf. below), then from the Mesh menu upper-left of the 3D View, click Clean Up towards the bottom of the list then Remove Doubles from the additional options shown – Mesh » Clean Up » Merge by Distance.

Design note: see below for additional options. To cancel Merge by Distance right-click or press Esc.

Merge by Distance (formally Remove Doubles) has been relocated to the 3D View’s Mesh menu – in Edit Mode make a selection then select Mesh » Clean Up » Merge by Distance.

When Merge by Distance is used bottom-left of the 3D View the Merge by Distance context overlay also appears. Here a number of options provide additional control over the tools behaviour; Merge Distance, a tolerance control, and Unselected, an inclusion control. To control how aggressive merging will be Merge Distance can be increased; any vertices within the threshold will be culled and merged to form a single, common, termination point/vertex. To include vertices than might not be immediately visible, or may not have been included in an initial selection but may fall within the required threshold, enabling Unselected will include such vertices or those not explicitly part of a selection being processed but within the threshold set by Merge Distance.

The Merge Distance option provide more control over a merge operation allowing for decreased tolerance (increasing the tolerance value increases the distance between vertices that might not have been initially included) and whether vertices need to be selected for inclusion in a merge or not.