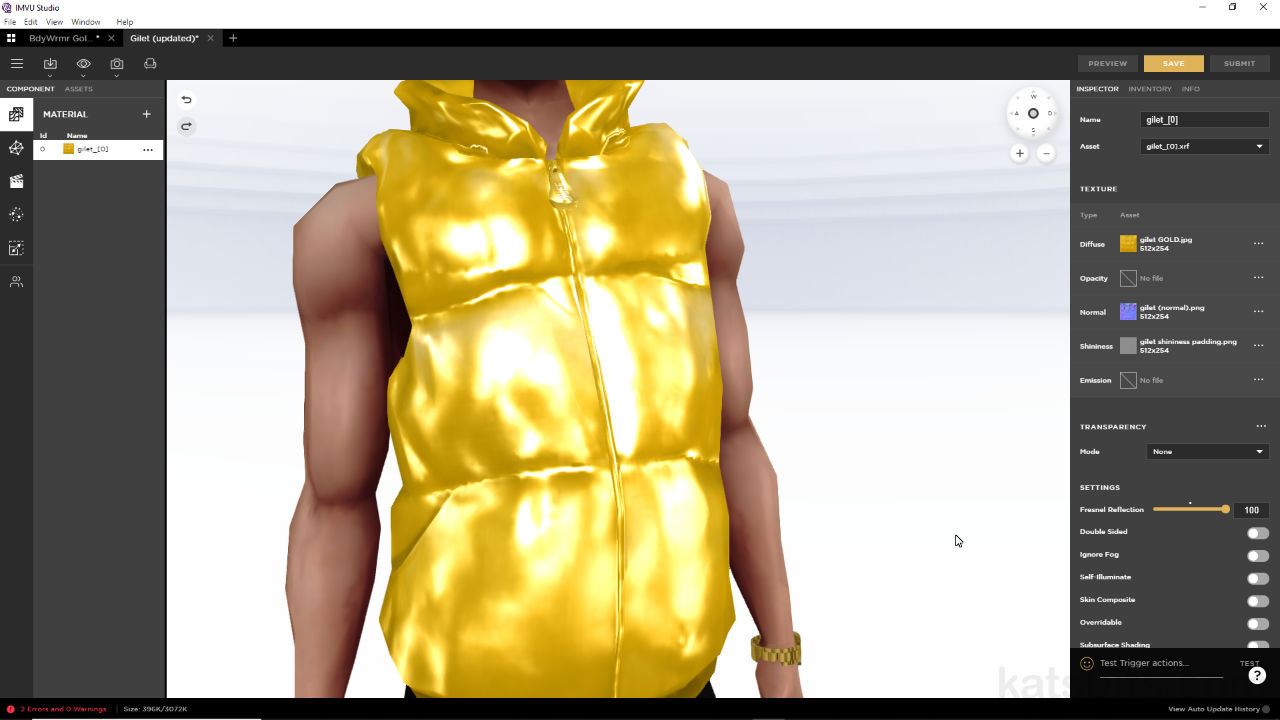 Shininess is an effect available to IMVU Studio and Desktop Client that makes materials appear glossy, bright or shiny. This can be affected as a subtle dull sheen, as might be visible looking at velour or velvet fabrics, to quite aggressive highlights typical of gloss paint or highly polished surfaces.

Shininess is a visual effect produced by dropping an image into the Shininess slot of a material [1] in IMVU Studio. This Shininess Map can be an 8 bit limited palette, or 24 bit RGB, greyscale image that’s designed to emphasise a materials surface characteristic. It does this by interpreting the map relative to scene or room lighting, greyscale values being rendered by the effect as glossy or shiny if white, or dull or matt in appearance if black, grey being variations between the two extremes.

Important: so long as the tones within an RGB image are fully desaturated to grey (black <-> grey <-> white), the image used can be 24 bit (a standard Red, Green, Blue channelled image) – shininess maps should not include any colour information as shininess colour is determined by lighting present in rooms, a red lit room will tint shininess red, a blue lit scene, blue and so on.

Because shininess represents a particular surface effect the maps should not include information that ordinarily might be interpreted as shading or shadows, i.e. fabric folds, directional lighting highlights and so on. In practice this means Shininess Maps ought not be created by simply desaturating unmodified Diffuse or Color (Colour) maps that often do include such detail, but instead generated with full consideration to the type of surface character shininess is meant to emphasise; polish, gloss, shine, wear, smoothness and so on.

Over-simplified for affect, image-top is more representative of a ‘true’ Shininess Map than image-bottom because it only includes information about the surface itself, it being worn, patterned and so on. Shadows and shading, image bottom, should be excluded because the darker tones will be interpreted as matt, non-shiny areas, making the effect appear patchy where that might not be the desired look.

With this in mind, how shininess maps are created depends on what they’re highlighting. The gilet shown above for example might be made from a nylon fabric that has a satin-like finish. To create something like that a ‘noise’ filter can be added to two a mid-grey fill layers, each then directionally blurred, left-to-right for one layer, top-to-bottom for the other, and then blended (using Soft Light or similar) so both are visible to varying degrees, thus giving the impression of the fabrics warp and weft. When assigned in Studio this pattern may render as subtle variations in the overall effect.

Design note: the greyscale tones of shininess maps generally determine where, and how relatively strong, the effect is, but Fresnel Reflection, a material Setting parameter, controls the effect overall – 0 = no or very matt shininess; 100 = full or over-bright shininess.

The Shininess map assigned to the material [i] generally defines where the effect appears and how strong it is relative to areas described in the image but Fresnel Reflection [ii] governs the effect overall.

The shininess map for a satin like fabric is essentially noise that’s mixed together to get a sense of the textural quality of the cloth otherwise used to make the garment; it’s not a flat grey image.