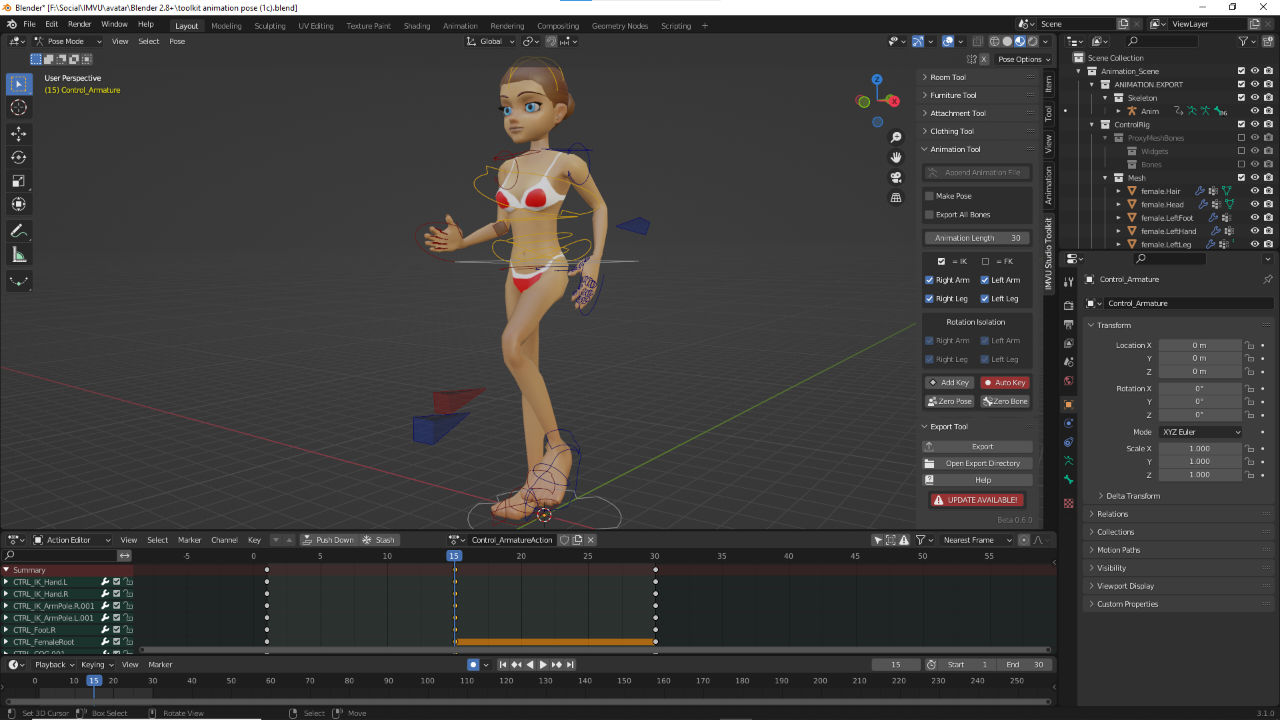 Design note: using the Toolkit it’s possible to export partial and full replacement animations, i.e. exporting just a waving hand, allowing any underlying action to play though in combination with the new item. To confirm which is being exported check the number of channels visible in the Action Editor timeline, for example the aforementioned hand wave may only display two or three channels in the channel list [1] whereas a ‘full’ action might display dozens or more [2].

The channels listed in the Action Editor correspond to the control objects used to articulate the avatar so manipulating a hand may only write keyframes for two or three [1] instead of all those available [2].

Deriving the default avatars, 80 (female) and 191 (male), rather than the Empty Mood (10945930), the importer will include the avatar skeleton used to make the animation, which causes an initial distortion when loading the FBX. To fix this, in Component select the Skeleton [3] sub-section and reset the Asset to Female04_Anime01_SkeletonMASTER [4] (or equivalent) before continuing.

Deriving from the base avatars can cause poses to distort. To fix this the skeleton being used needs to be reset in Skeleton [3] options where Female04_Anime_SkeletonMASTER [4] will be available.

Creating an Avatar that’s a derivation of the default male (191) and female (80) characters, imported animations will need to replace all Ensembles assigned to existing actions [5], for example selecting stance.Standing lists ten separate Ensembles [6] each assigned a different animation the action randomly plays, they all have to be replaced with the same settings for a single animation, or a similar number of animations that override the defaults.

The default avatars have a number of existing actions associated with them the need to be overridden. Generally this is done by replacing each Asset with the import [5], then replacing each Ensemble similarly [6] depending on the expected outcome.