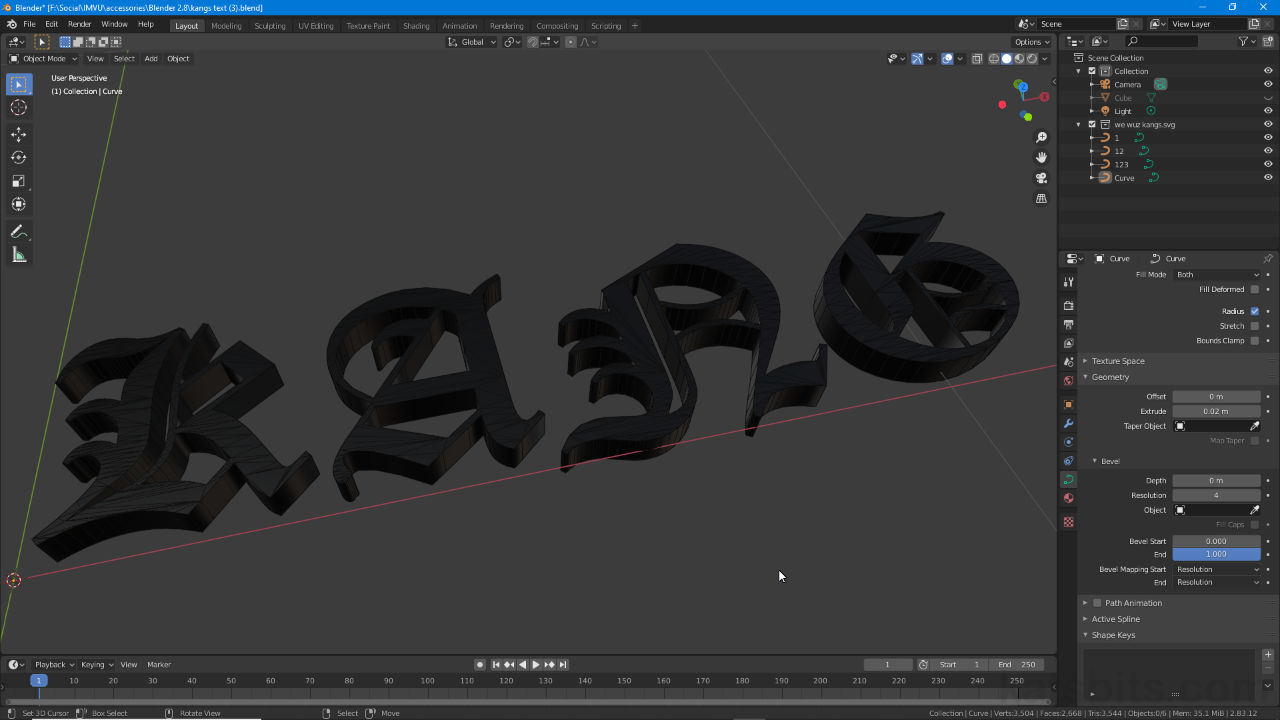 In this exercise we take a look at importing some custom text into Blender created in an external image application. For this to work the text needs to be exportable as line-art rather than bitmaps or actual text using fonts that may not be available to Blender, and to the supported Scalable Vector Graphics format (*.SVG). Once imported as Bezier curves, text can then be cleaned up and optimised by reducing it’s overt complexity before than conversion to mesh objects ready for use.

Important: using complex fonts to generate text tends to increase the likelihood curves will need some clean up and optimisation after import, deformation and inconsistencies due to the way vertices are positioned to describe the letters.

Design note: altering Beziers by changing various Object Data Properties settings is a non-destructive process; once a change has been made if can be reverted (so long as the object remains a Bezier or Curve object). In similar fashion it’s also possible to use Modifiers [1], for example, assigning the Solid modifier [2], its Thickness value can be set to a positive (down) or negative (up) number that extrudes the shape much like it does as a Geometry setting in Object Data Properties, with the added benefit that different modifiers can be stacked (assigned to the curve), each influencing the object in a particular way to shape the outcome.

An alternative way to change imported curves is to assign a Modifier [1], in this instance Solidify [2] that can similarly ‘extrude’ or ‘solidify’ the Bezier structure along the local Z axis – negative (up), and positive (down).

Beziers and Curves generally import as objects aligned to Blenders primary axis, Z up/down, laying flat on their backs (Top view – NumPad 7 – looks down on the text). In Edit Mode the same is also true, Z points along the up/down axis, text lies (remain) flat. Subsequently extrude, either as an Object Data Property or Modifier, will change the curves shape along this axis in both directions for the former (up and down), and single direction for the latter (up or down), with the curve itself acting as a centreline or baseline from which this occurs.

The Bezier itself acts as a centreline when modified using Geometry settings and will extrude or change along its local Z axis.

Using a Solidify modifier curves are extruded along the Z axis but in a single direction only (per instance), either up or down depending on a positive or negative value being used. However, Modifiers accommodate more complex structures depending on the results required.

The points that describe the shape of Beziers and curves generally, are editing by manipulating individual vertex points and/or accompanying control handles. Typically there are two, one on either side of the vertex describing the curve based on their distance from the vertex to which they belong; close too and the curve can be steep, further away long and shallow [3], sharp corners with either/or coincidental with the vertex [4].

Beziers can be edited by modifying the individual vertices or control nodes that shape the form. Typically there are two for long shallow curves, or one for sharp corners cause by the control point being coincidental with the Bezier vertex.