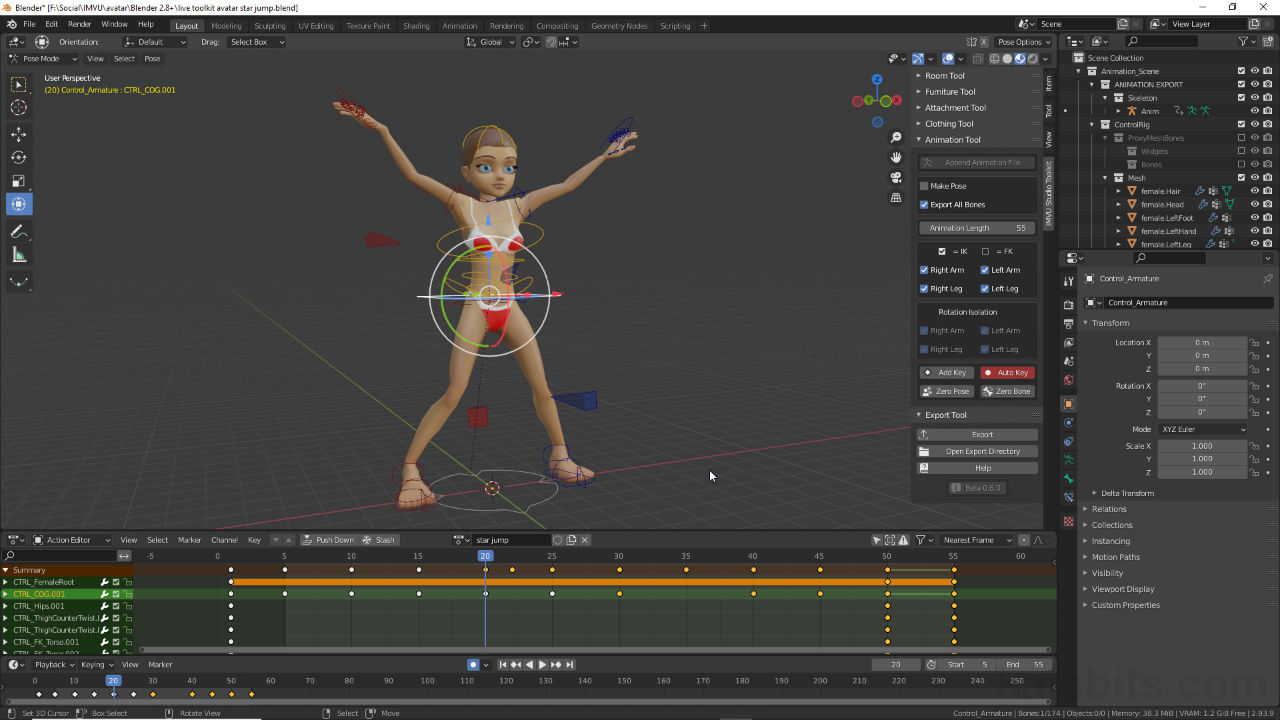 When Creators say they want to create an ‘avatar’ what they actually mean is they want to create a pose pack that’s derived from the base female (80) and male (191) avatar products. A Pose Pack then, is a set or collection of individual static or animated poses that replace the default stance.Standing and stance.Sitting ensembles. With this in mind we take a look at using the IMVU Studio Toolkit for Blender to make a number of poses, both static and animated, exported as FBX and imported and assembled in IMVU Studio (recorded live so may include off-topic chat).

Design note: the female and male avatars each have different ensemble counts for their respective stance.Standing and stance.Sitting actions; female has 10 and 8, male 5 and 7. So long as each ensemble is overridden with something it’s not necessary to create the same number of animations in Blender. In other words one animation can be used ten times just as readily as ten animations are each used once.

An Action [1], triggered automatically or manually, typically includes a number of Ensembles [2], each referencing an animation and associated properties that needs to be overridden with a custom animation or the defaults will continue to play upon activation.

When making a number of animations it’s a good idea to name each sequence to make it easier to assemble the action in Studio – by default the Toolkit uses the same label for each sequence, Control_ArmatureAction. To do this click the Name input field [3] in the Header of the Action Editor and type a new label e.g. right stomp (use standard alpha-numeric characters, spaces between words are replaced with an underscore “_” on import e.g. right_stomp).

For ease of assembling multiple ensembles in Studio (re)name the Action sequences in Blender clicking the Name input field [3] and typing something appropriately identifiable.

Prior to exporting double-check Make Pose and/or Export All Bones [4] are appropriately set relative to the animation being created. If the pose is to replace an avatar default completely so nothing of the original is played or triggered, Export All Bones should be enabled to force the inclusion of every bone in the exported FBX, which then override the defaults when assembled in Studio. Similarly, if a a pose in Blender is meant to be a ‘static’ or ‘statue’ pose (does not move or animate), then Make Pose should be enabled to force the pose data to be correctly formatted for IMVU.

To ensure animations work correctly in Studio, prior to export set Make Pose and/or Export All Bones [4] respectively forcing the resulting FBX to include the correct data in a format IMVU needs to determine what type of pose is being imported and assembled.

The underlying timing IMVU uses to determine how animations behave is 30 FPS (Frames Per Second) so a single framed pose lasts 1/30th of a second. To change this an animations characteristics can be modified in Studio altering its Duration parameters (click each ensembles the ellipses, “…“, to access). Here the Start and End frames can be set, typically Start: 1 and End: 2 for static poses [5], then Loops, the number of times the frame range set by Start/End repeats, e.g. Loops: 30 repeats the single framed pose 30 times or for 1 second (30 FPS), or Loops: 240 [5] for 8 seconds. For animated poses the number of times it repeats, and the length of time it takes to do that, differs only in the Start and End points set, e.g. Start: 5, End: 55 [6] is a sequence that lasts around 1.75 seconds (30 + 25 frames) so the number of times this needs to repeat to approximate 8 second would be Loops: 4 (or 5).

Important: when setting up the Action in Studio each ensemble needs to be replaced to prevent the defaults triggering whenever the avatar does something, move, change outfits, shakes hands etc., e.g. each of the 10 ensembles in stance.Standing needs to use the same animation once, or one each of 10 separate sequences (or 5 re-used twice and so on).

Static poses are generally only a single frame (1/30th of a second) which can be made more usable altering the Duration settings for the ensemble, number of loops in particular [5]. Whereas animated poses tend to be dozens of frames which don’t then need such high loops values [6].