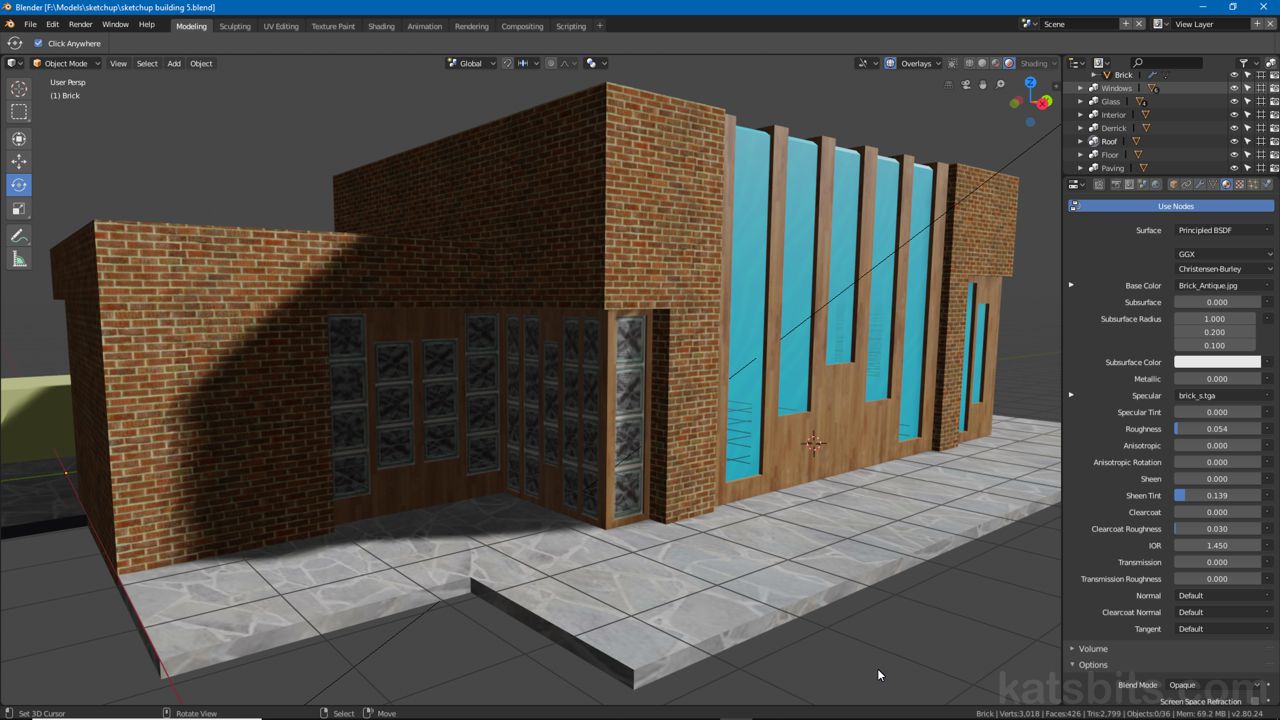 In Blender 2.8 the simplest Materials can be created using just two nodes, an Image Texture node linked to a Material Output node; the former references an image (generated, bitmap etc.), the latter is the output-to-screen element necessary for material display, a combination that approximates Blender Render style materials. In the 3D View, whilst this node set-up does result in images being shown, they appear flat lit (or full-bright), that is the mesh and UV mapped images don’t shade or shadow across surfaces, meshes or objects.

Design note: shading and shadows are two distinct visual effects. Shading is a localised effect, it changes the way surfaces and objects ‘shade’ or darken in relation to light, emphasising the selected objects shape, form and depth in three-dimensional space. Shadows on the other hand generally darken scene objects with respect to one other and light sources. In essence shading does not propagate across to or influence the appearance of other objects, shadows do.

Basic materials with Image Texture and Material Output nodes display textured meshes in the 3D View flat-lit, essentially without shadow or shading (note the default cube to the left displaying shadows cast from the building mesh).

With this in mind, what the Principled BSDF node essentially does is add a set of baseline properties to the overall material that affect its final appearance, principally the options and settings formally available in Blender 2.79 and below as Material and Texture Properties, that is Diffuse and Specular values, Shading options, Influence settings and so on, all now largely available under or though Principled BSDF, alongside more advanced effects, Sheen, Normal etc.

Design note: if the nodes don’t automatically connect left-click drag the connection nodes to manually link them together.

Without Principled BSDF mesh objects tend to appear flat-lit in the 3D View when using Rendered shading options (top-right) – shown above for example the main ‘brick’ material is flat-lit compared to other objects in the scene, windows, frames, ground etc.

Once a Principled BSDF node is dropped into place between Image Texture and Material Output surfaces assigned the material because more responsive to shading and cast and received shadows.

In practice, to make a basic material that utilises the Principled BSDF node a simple ‘next gen’ material can be generated associating a specular image with the Specular setting, and a tangent space normal map with Normal. To do this, with an instance of the Principled BSDF node between the initial Image Texture and Material Output nodes ([Image Texture] Color » [Principled BSDF] Base Color | BSDF » [Material Output] Surface), add two more Image Texture nodes (Add » Texture » Image Texture). In one, generate, add or load the specular image, in the other the normal map – click the Browse image to be linked button to assign an already loaded image, the + New button to create a Generated image, or Open to load an external bitmap. Each Image Texture node heading/title will change to reflect the image referenced by the node.

Design note: normal maps may appear inverted when used inside Blender. To fix this invert either/or/both the green or red channel in an image editor (typically only one channel needs to be flipped).

Design note: the images used to control specular highlights are typically grey-scale but can be coloured or colour tinted depending on the destination/where meshes/models are to be used; game engines for example may only permit the use of grey-scale single channel (8 bit) images which Blender should have few issues using (if any).

Aside from essentially enabling shading and shadows in Rendered mode using the Principled BSDF node also allows for the addition of specular and normal maps (as images in the above). Simply drop in an Image texture node for each bitmap [1], a Normal Map node [2], then link everything together – specular [1] » [3], normal map [1] » [2] » [3].

A before (left) and after (right) example of a basic ‘brick’ material using Principled BSDF with specular and normal maps controlled using images.