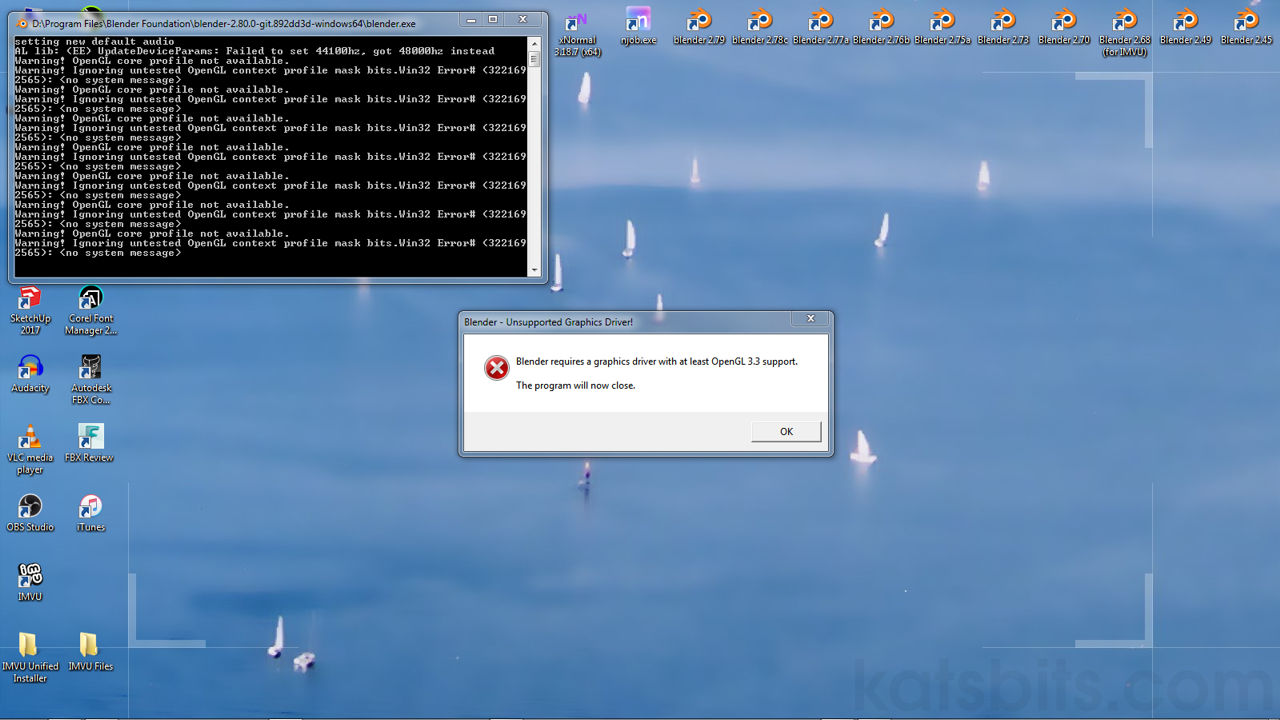 Blender 2.80 is as much of a change from version 2.79 as 2.50 was from 2.49 in that significant parts of the internal rendering system has been rewritten to accommodate more modern systems and effects. Unfortunately this mean it may not run when installed to older computers, desktop or laptop alike, unless the graphics sub-systems support OpenGl 3.3 or above.

IMPORTANT NOTE: unfortunately Blender 2.80+ will not run on a “Potato PC” so a bigger potato, or an appropriately sized sack of potatoes, preferably of a red or russet variety, will need to be purchased at some point – sadly there is no way to avoid this recipe requirement without burning everything and setting the kitchen on fire.

Design note: generally speaking Blender not running on a given computer is more likely a hardware, rather than software issue (notwithstanding operating system/driver incompatibilities).

How to check Blender 2.8 compatibility

Design note: Intel’s graphics infrastructure is a component of the CPU rather than a separate or dedicated external card as might be provided by nVidia or AMD so the nomenclature used may not be specifically generational as they might otherwise thought; HD 2000, 3000 and some 4000 subsystems for example, can be found on Intel i3/i5/i7 2nd generation CPU’s (e.g. i3 2330, i5 2500 etc.). For NVIDIA, ATI/AMD, most graphics card from NVIDIA‘s 4th generation (and above) support OpenGL 3.x, this includes ‘m’ or mobile class embedded GPUs, i.e. Geforce 405m supports OpenGL 4.5 (3rd generation or below do not support 3.x). For ATI/AMD, cards/mobile modules based on the R500 GPU support openGL 3.x although preference should be for R600 or above as this supports OpenGl 4.x ensuring greater compatibility.

Using this information search the Internet for details. For the above this might bring up this from Intel itself or this from Wikipedia, the upshot being that Intels HD 3000 only supports OpenGL up to 3.1 on Windows. In this instance Blender 2.8o won’t run on Windows 7, 8 or 10 resulting in the error seen.

How to fix the Blender 2.8 compatibility issue

Notwithstanding driver updates, unfortunately the only way to fix or address the issue and get Blender 2.80 up and running is to update the systems graphics hardware, the graphics card, onboard chipset or component responsible for rendering graphics to something that’s OpenGL 3.3 compatible. For laptop/notebook users this is generally not possible (unless using an MXM module). For desktop users any modern card manufactured within the last few years should be capable of running Blender 2.80+ (cf. above) but double-check before purchase.